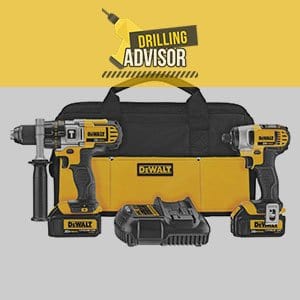 These points include raw specs such as motor and power type. But it will also take price and overall user experience into account as well.

The DeWalt DCK290l2 experience begins by simply holding it. The grip itself offers a secure surface that won’t slip even during heavy projects. The overall heft of the drill also sits in a perfect range. At around 14lbs it’s neither too heavy nor too light. It offers a few extras on top of the solid construction. For example, it comes with three built-in LEDs with an automatic time delay.

The LED system is both for utility and safety. It helps one properly use the drill in conditions with low to no external light. This increases the overall quality of one’s results. But it also serves to keep users safe when working in those otherwise dangerous conditions. Because LED lighting systems are low power this won’t create much additional drain on the drill’s power supply.

The weight and grip also serve as safety standards. These work together to create an experience that’s ideal for almost any user. Newcomers should appreciate the extra help offered by these safety standards. Experienced users will too. However, they’ll also note the powerful 2,800 RPM produced by the motor and the powerful battery. This gives experienced users the speed to quickly finish otherwise time intensive projects.

The DeWalt DCK290l2 boasts some impressive technical specifications. One of the more notable features comes from the combination of motor and battery. This ensures one can have both high performance and dependable battery life. It also comes with a battery so there’s no need to purchase it separately.

The DeWalt DCK290l2 also works with common drill standards. This means one can easily find extensions or secondary batteries if needed for a project.

The DCK290l2’s specs paint an impressive picture. However, one should also consider some more complex points to determine more extensives pros and cons.

The 20v motor is capable of producing an impressively fast RPM. It’s quite a bit faster than most competitively priced drills. It also holds up exceedingly well in situations which might cause other drills to overheat. One might expect that higher performance to come at the cost of battery life. However, one can expect a day or more per charge.

The biggest downside for many users is the chuck’s tip. The drill places a hex nut in that area which can make it harder to index larger bits simply by feel. One should develop a knack for it in time. But that might still come as something of a surprise to new users. Additionally, it doesn’t ship with some of the nice extras some competitors provide. For example, there’s no hard case or bit holders.

The average user opinion tends to be extremely positive. And this holds true for most usage scenarios.

The overwhelming opinion focuses on how much one receives for the price. Users are usually very surprised by just how powerful this drill is. And in large part that’s due to the fact that it’s fairly inexpensive when compared to similar models.

Users are usually impressed by the ease of use as well. The firm grip and lack of slippage sits among the more commonly commented on benefits. However, that’s not to say that people are totally lacking in reservations. That’s not always a slight against the drill itself though.

Some users note that it’s possible for an absolute beginner to hurt themselves or the drill. This is due to the generally high power nature of this device. And it’s something one would find with any high performance drill no matter how many safeguards are in place.

The drill’s versatility becomes apparent when looking at user projects. People working with a variety of different surfaces are equally complementary to the drill. This shows that it’s equally usable in almost any type of construction project. From working with wood to working with electrical systems.

This DeWalt DCK290l2 review emphasises a few major points. Of these, one should pay special attention to the versatility of a DeWalt DCK290l2 drill. It’s a solid option for people of almost any skill level. And on top of that it’s solidly built to the point where one can easily hone their skills over the years.

The DeWalt DCK290l2’s versatility also means that there’s a lot one can do with it. Readers are encouraged to share their own experiences, tips and general thoughts on it. It’s a powerful enough drill that one can always find new ways to use it.

Note: If you’re interested in learning about other 20V drills from DeWalt, why not check out our review of the DCD771C2 20V drill as well?